Private real estate throws money at its young and restless. Recruiting at the junior levels is becoming a more expensive game to play for the sector’s managers, Jonathan Brasse finds.

It is a good time to be junior in private real estate investment. The sector’s senior executives are coming under in-creasing pressure to match institutional liabilities with smart investing strategies, while determining how to deploy historically high volumes of capital in marketplaces offering decreasing performance. Real estate private equity.

Junior acquisition executives, however, are required simply to execute, and those who execute best are finding no shortage of suitors. The increasing value of private real es-tate juniors to managers is showing in industry pay numbers. 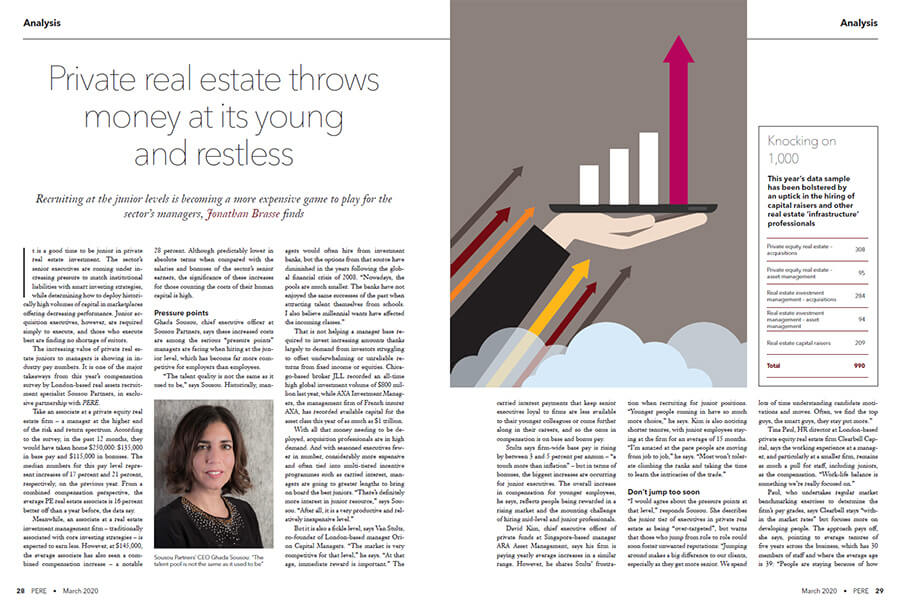 It is one of the major takeaways from this year’s compensation survey by London-based real assets recruit-ment specialist Sousou Partners, in exclusive partnership with PERE.

Take an associate at a private equity real estate firm – a manager at the higher end of the risk and return spectrum. According to the survey, in the past 12 months, they would have taken home $250,000: $135,000 in base pay and $115,000 in bonuses. The median numbers for this pay level repre-sent increases of 17 percent and 21 percent, respectively, on the previous year. From a combined compensation perspective, the average PE real estate associate is 16 percent better off than a year before, the data say.

Meanwhile, an associate at a real estate investment management firm – traditionally associated with core investing strategies – is expected to earn less. However, at $145,000, the average associate has also seen a combined compensation increase – a notable 28 percent. Although predictably lower in absolute terms when compared with the salaries and bonuses of the sector’s senior earners, the significance of these increases for those counting the costs of their human capital is high.

Ghada Sousou, chief executive officer at Sousou Partners, says these increased costs are among the serious “pressure points” managers are facing when hiring at the jun-ior level, which has become far more competitive for employers than employees.

“The talent quality is not the same as it used to be,” says Sousou. Historically, managers would often hire from investment banks, but the options from that source have diminished in the years following the global financial crisis of 2008. “Nowadays, the pools are much smaller. The banks have not enjoyed the same successes of the past when attracting talent themselves from schools. I also believe millennial wants have affected the incoming classes.”

That is not helping a manager base required to invest increasing amounts thanks largely to demand from investors struggling to offset underwhelming or unreliable returns from fixed income or equities. Chica-go-based broker JLL recorded an all-time high global investment volume of $800 million last year, while AXA Investment Managers the management firm of French insurer AXA, has recorded available capital for the asset class this year of as much as $1 trillion. With all that money needing to be deployed, acquisition professionals are in high demand. And with seasoned executives fewer in number, considerably more expensive and often tied into multi-tiered incentive programmes such as carried interest, managers are going to greater lengths to bring on board the best juniors. Real estate private equity 2020.

“There’s definitely more interest in junior resource,” says Sousou. “After all, it is a very productive and relatively inexpensive level.”